This Cinnamon White Hot Chocolate recipe is perfectly creamy with a touch of cinnamon, vanilla, and almond. Ready in 10 minutes, your family will love this quick holiday treat!

I first had white hot chocolate at my in-laws’ house several Christmases ago.

It’s a creamy and light version of the traditional hot cocoa treat.

As it happens, this recipe has actually created quite the riff among my in-laws…

Some people love it and others can’t stand it, but my mother-in-law makes it every Christmas either way.

I happen to think it’s delicious and I know your family will too!

WHISK over low heat until melted.

ADD remaining milk (3 cups total) and whisk until heated through.

ADD 1 teaspoon vanilla and 1/4 teaspoon almond extract to the hot chocolate mixture and stir to combine.

If you want to make the recipe extra rich, you can use half and half instead of whole milk.

I love cinnamon so I added a whole teaspoon to my batch (and you can tell by how dark the hot chocolate is!). If you’re not a big fan, start out with 1/4 teaspoon, and then add a little more at a time to taste.

If you want to keep the white hot chocolate warm without leaving the stove on, you can pour the mixture into a crock pot and set it to warm.

You can top this white hot chocolate with whipped cream, marshmallows, sprinkled cinnamon, and you can use cinnamon sticks for stirrers.

Try these almond extract substitutes if you’re out of the ingredient.

For a peppermint version: omit the cinnamon and nutmeg and replace the almond extract with mint extract. Then you can add crushed candy canes on top of the whipped cream and use peppermint stick stirrers.

What is white hot chocolate?

White hot chocolate is a warm drink made with melted white chocolate chips, cream or milk, and spices and flavorings.

White hot chocolate tastes like a lighter version of traditional hot chocolate. This recipe has a very similar taste to a Starbucks steamer: not too sweet, but still very delicious.

It also reminds me of a cinnamon roll! With the cinnamon spice, vanilla extra, and melted white chocolate chips.

And if you’d like to get a 4-week meal plan featuring my recipes, just enter your email in the form above and you’ll get it straight to your inbox! 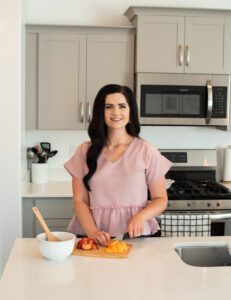 A mom of four and fellow home cook. I love pasta, grilled chicken and anything sweet. I’m here to give you easy weeknight dinners for your family. Let’s get cooking!